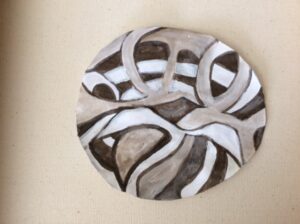 After howling with passion during the Aries sun cycle there is a balm to be found in the fixed sign of earth, Taurus. 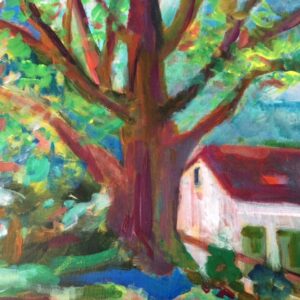 Earth Day is aptly celebrated in late April when the sun enters the sign of the Bull.

Ruled by the love planet Venus, it symbolizes  beauty and the pleasures of the senses including voice. Ella Fitzgerald, Barbara Streisand, and Cher are some of the many vocalists born under this sun sign.

How are you nourishing yourself this season? 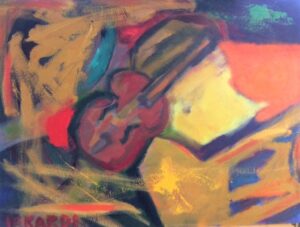 Last week I sought respite in the White Mountains and bought a new guitar at Northern Lights store in Littleton. Littleton is also the town where the author of Pollyanna resided. At an impressionable age I savored Disney’s “Pollyanna.”   When Hayley Mills enters the dark home of the scary neighborhood recluse I go in too, in fear and trembling.  She had to encounter him and so did I before we could be entranced by the prisms of color darting from his chandelier.

The Way is Easy

The Way is easy, yet people prefer by-paths. You can know what your path will look like by what you nourish. As Thunder is aroused within, you have the opportunity to observe what motivates you, and what you nourish at the root of each experience. At the threshold of perception, “pay heed to what you provide with nourishment, and to what you seek” because you will find it.~ I’Ching, (Kari Hohne, Cafe Au Soul) 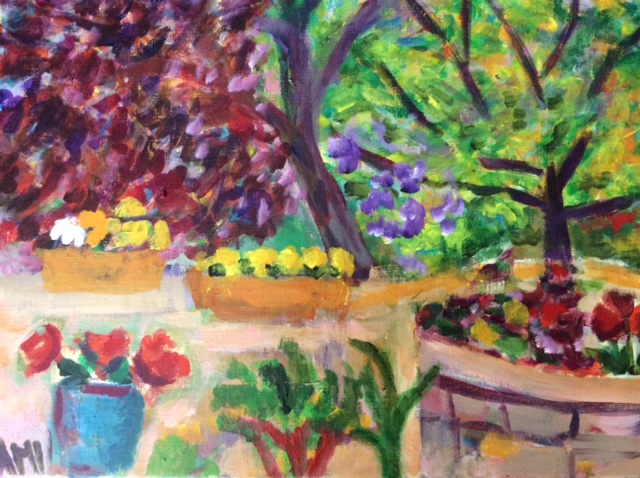 I have been experimenting this month with simpler mediums: acrylics instead of oils. This painting  is our garden, lovingly tended by Judy. The painting above grew out of an encounter with Jane and Tom’s wonderful tree in their home in Brewster. I also created mandalas with color and India ink inspired by the “Weeping Beech” tree.

Recently, I zoomed into an enlightening workshop on Carl Jung given by writer Susan Tiberghien from Geneva, Switzerland.

In the middle of his life, Jung suffered personal and professional losses…and worse, he felt he had lost his 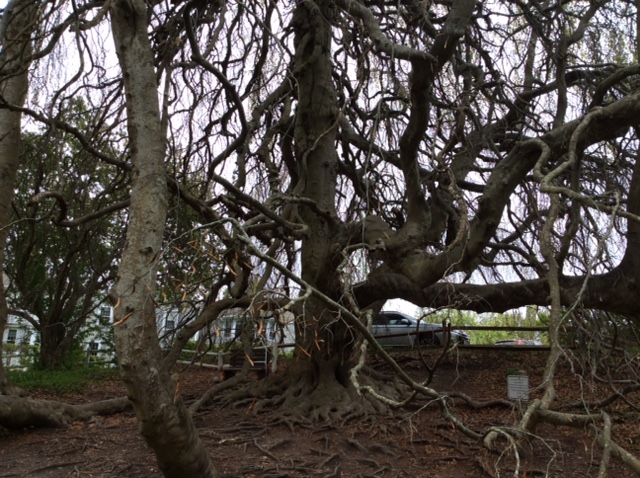 soul. He realized he must  stake his life on becoming whole, on oneness with all of creation.  Jung recorded his dreams, visions, and colorful mandalas in secret journals which in 2009, after his death, became “The Red Book.”

The Red Book is the largest book in my collection; it needs a table of its own to view it. Jung revealed the wisdom of “displaying the lantern of your soul in dark times.

I visit the “Weeping Beech,” a 100 year old tree in my village.  Surrounded inside a tangled web of this magnificent being, I sense the oneness, the expansiveness and firmness growing out of the one root…the blessed wholeness of  being. 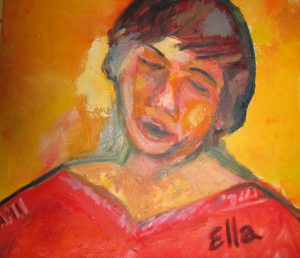 I listen to her warm expressive voice on the Intimate Ella CD and her unbelievable live performance in Rome scatting and infecting her audience with humor and swing. Read Stuart Nicholson’s Ella Fitzgerald for a wonderful portrait of this First Lady of Song.- A. Ierardi

lla Jane Fitzgerald was born on April 25, 1917 in Newport News, Virginia. Her mother Tempie and her stepdad Joe moved to Yonkers where Ella grew up. In spite of being a  young shy girl, Ella projected a happy personality. She declared to her friends that she would be famous one day. Ella loved to dance and began performing at age fifteen with her friend in small clubs.  Tragically, Ella’s mother died suddenly when only thirty-eight, her aunt took Ella into her home in Harlem.

The next few years were difficult ones. She skipped  classes in high school. As a result she was sent to  a state reformatory where she was mistreated. Ironically, her escape from this institution to the streets eventually brought her to try out at the Apollo Theatre where she won first prize in 1934.

After she tried out on amateur night at the Harlem Opera House. Chick Web heard her in the audience and invited her to join his band.  In 1938, Ella recorded  “A Tisket, a Tasket.”  As a result, she achieved her first number one hit and fame.

I never knew how good our songs were until I heard Ella Fitzgerald sing them. -Ira Gershwin

In Her Own Words

“I owe Marilyn Monroe a real debt. It was because of her that I played the Mocambo, a very popular nightclub in the ’50s. She personally called the owner of the Mocambo, and told him she wanted me booked immediately, and if he would do it, she would take a front table every night. She told him – and it was true, due to Marilyn’s superstar status – that the press would go wild. The owner said yes, and Marilyn was there, front table, every night. The press went overboard. After that, I never had to play a small jazz club again. She was an unusual woman – a little ahead of her times. And she didn’t know it.”