Let all of life be an unfettered howl. Like the crowd greeting the gladiator. Don’t stop to think, don’t interrupt the scream, exhale, release life’s rapture.” Vladimir Nabokov

Last night when I discovered this quote on a blog, I immediately recalled

my dream from the night before.  In the dream my dog let out a howl responding to a loud noise. In his elder years, Duchy took up a new habit. Whenever Judy puttered in the basement too long he stood at the stairs and howled for her.

Would our society be less violent if we had howling stations, open spaces like driving ranges, to release all the pent up emotional, psychic, and stress-driven morass?

According to feng shui, our house was too yin (feminine principle). Judy and I were relieved when Duchy entered our home and stayed for 18 years.  “Duchy Yang” gave us balance. Without Duchy and now quarantine our home must have turned into “double yin.”

Thankfully, a new zodiac year has now burst forth in Aries. The first sign of the Ram signifies action and passion.  Singer songwriter Alberta Hunter, born under the sign of Aries shouts, “I’m having a good time….Me…don’t blame me. I’m knocking myself out. Don’t try to tame me.”

Vincent Van Gogh and Billie Holiday were also born in this fire sign. Their unique contributions to art and song were further enhanced by the strong water element in their charts . The opposing forces of fire and water show the depth and intensity of their work along with the turbulent nature of their lives. 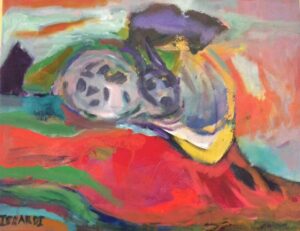 How wonderful to be alive, to open the windows of my studio, welcome in spring, and the spirit of change!

I  imagine this seascape ala Vincent as my passion for the ocean as he inspires love of the fields, walking and laboring to bringing joy and new ways  of seeing.

What is making you howl today?

Scroll down to read my profiles of Billie Holiday and Alberta Hunter.

I bought my first Billie Holliday album at Filene’s Basement for 49 cents. A lavender jacket cover on the Verve label with songs on it You Go to My Head, Solitude, Good Morning Heartache, finished off with her haunting Strange Fruit.  Billie made the blues edible and secure, made melancholy transcendent.  Billie gave me the sounds of emotions I could not explain or express.  She led me lovingly to the deep places and I am indebted to her – Anne Ierardi

She stopped by my table at a Hollywood club where I went to hear her.  She raised her glass and said, “To girl singers, especially us Irish singers.” I looked surprised; she laughed. “Yes, Irish. One-eighth, anyway. my great-grandmother was a slave in Virginia and my great-grandfather was the master, Charles Fagan.” It was only the first of the surprising things I had in common with this strange, elegant, troubled woman. We both had teenage parents who couldn’t care for us and were raised mostly by our grandmothers. When she performed at the club, I’d heard the pain in her voice, a raw sound just beneath the smooth surface of the melodic line, sometimes showing though before she shaped it into laughter…Like me, she started singing professionally not as much out of love but out of need. 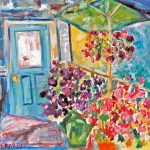 “Know what my dream is?” she said quietly. “To have a big place of my own out in the country someplace, where I could take care of stray dogs and orphan kids. We’d have a big kitchen with a chartreuse stove, and I’d supervise all the cooking… I’d always be around to teach them my kind of teaching.” She gave me a long, level look. “Not the kind that tells them how to spell Mississippi, but how to be glad to be who you are and what you are.”

A most wonderful thing happened in my twenties. My visits to art museums in New York City coincided with going down to the Cookery in the Village to hear Alberta Hunter. I feel in love with Alberta. I also found a new lover and I took her to the Cookery.  But the performance was sold out. I told the doorman:  “I came all the way from Cape Cod. I have to see her.” He let us in and we got her autograph too. What a show!  – Anne Ierardi

Alberta Hunter was born in Memphis in 1895. An independent spirit, she ran away from home at age twelve to seek her fortune in Chicago. In her twenties, she became a star singing with the King Oliver Band. Hunter also wrote music including “The Downhearted Blues” which was a big hit for Bessie Smith. In 1927, she began her travels to Europe and starred in London with Paul Robeson in “Showboat.”

From WWII to the Korean War, she made seven USO tours entertaining the troops. She returned to New York and decided to become a nurse, which she did for 20 years never missing a day of work she proudly recalled. In 1977 Barney Josephson brought her out of retirement at age 82 to play at the Cookery. She made new recordings including the soundtrack for the movie “Remember My Name.”  She died in 1984 after seven years of inspiring people of all ages with her wit, her jazzy blues, her teachings about life, and the love she felt for her audiences. 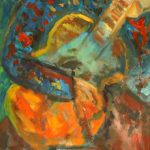 She felt she did the Lord’s work first by nursing bodies for twenty years and then by nursing the spirits of all those who saw or heard her perform.  As her nephew, Sam Sharpe said, “Going to see her was like going to an old-time faith healer. People go in with aches and pains and come out feeling like jumping up and hopping down the street all the way home.”

She seems to grab a song by the throat and tell it to be something; as a result no word, no phrase goes by without standing up straight and telling you exactly what it means… Rafi Zabor,  Musician magazine

Miss Hunter embodies all of what blues are – joyous, sly and sensual as well as sad. -Don Nelsen, New York Daily