Italy is a dream that keeps returning for the rest of your life.
-Anna Akhmatova
You may have the universe if I may have Italy.
-Giuseppe Verdi
Consider your origin; ye were not formed to live like brutes, but to follow virtue and knowledge.
-Canto XXVI, Dante Alighieri

Italy is a dream! When my parents and I arrived at Kennedy airport in New York, we saw a bunch of tired, bored college students stretched out over the carpet and chairs in the terminal. They were to be among the eighty students I would live with in Tuscany. My mother’s worries about the dangers of the pinching and prowling behavior of Italian men had been lifted after the research doctors she worked with in her lab at Harvard Medical School reassured her, extolling the wonders of this great opportunity. My mother took pride in her daughter while updating “the boys” in the lab at Harvard over the next three months of my adventures.

After spending a night in quaint Luxembourg we boarded a train to take us to Florence via snow-capped Switzerland. Our group was exhausted as we scrambled to catch the local train to Figline, already behind schedule. The Italians held up the train for us. Suitcases were quickly passed through the compartment windows. Everyone at the terminal watched with great interest, some cheered, some bewildered, as all of us Americani ran to board the train.

Paolo, our professore, met us at the station. Our bus climbed the steep hill, beeping its horn as it circled each bend, to bring us to the piccolo villagio, Figline Valdarno, and the monastery of La Poggerina. A warm welcome to the ancient monastery greeted us in the refectory. The cook prepared a sweet roll with a delicious golden-sweet wine, the first taste of La Poggerina. 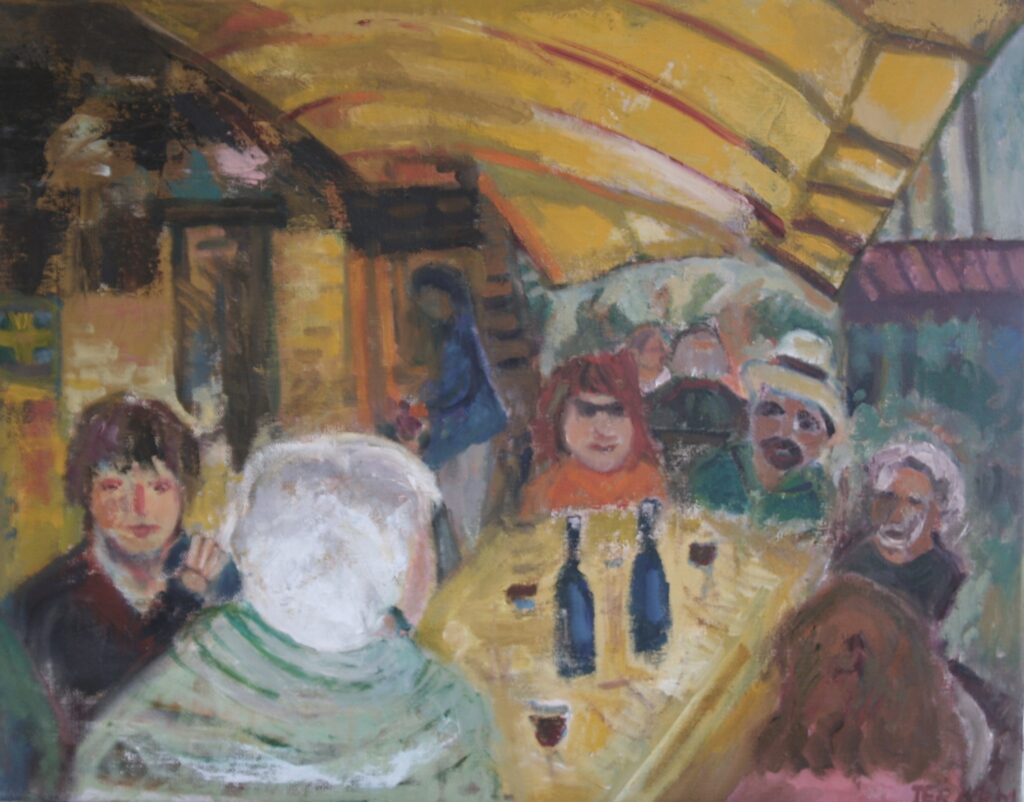 From my journal: I naturally feel a degree of strangeness being here in Italy yet I feel a strong desire and harmony with these surroundings. People take so much pleasure in being together. They are bound to each other through their emotions, through compassion. I sense a maternal identification with the women reminiscent of my relatives. The countryside is peaceful and still. In the afternoon the people eat, rest, talk, and play. …It’s easy to lose track of time here. Time becomes irrelevant. It passes quickly here because no one is in a rush.

Half of the week I took courses and the other half I traveled with a few older students: a teacher named Joy and a paesani Francesca (her grandparents and my maternal grandparents were from the same province of Abruzzi and she knew a smattering of Italian dialect). Many evenings I walked down the hill to the bar to order a glass of Vermouth, a Perugina white chocolate bar, and to practice my Italian with the locals. The aged lady who served at the bar always gave me a beautiful and gracious smile. I became friends with a man in the town named Remmo. He was serious and kind, dark-complexed with short hair, rather handsome and thin like most Italians I saw in Italy. We spoke Italian and played ping pong. I eventually realized he desired more than that from me though fortunately not until the program was almost over. I told him in Italiano “impossibile.” A wonderful word in our common languages. On the day I left Italy he lovingly inscribed a copy of La Divinia Commedia telling me, “when you can read this you will have mastered Italian.” He placed a leaf inside the book which still remains.
***
On Tuesday mornings the piped-in monastery bells at 7AM awoke us to board our bus for class in Florence. I rose in Italy without hesitation and even went to bed earlier than at home. I felt my instincts, senses and body awakened in a totally new way. Eating fresher simpler meals, drinking only water and local wine and a morning cappuccino helped my constitution. 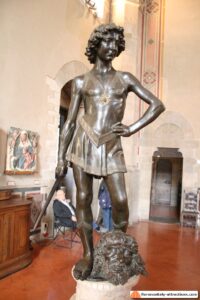 Paolo Barruchieri, our art history professor, lectured on Renaissance Art and Medieval Tuscan Art in a classical Renaissance building in the Piazza Republica. Paolo, like many Tuscans, was fit, self-assured and intellectual. While I didn’t easily warm up to him, I learned from him. “The Italians,” he exclaimed, “are not Romantics like the Northern Europeans – they are classical and practical. Look at the Romanesque style. The Gothic didn’t flower in Italy like other parts of Europe. The Tuscans are very earthy minimalists.” Yes, I concurred, not even salt or sugar in their bread. I would have to wait to get to Southern Italy to enjoy some of the sweet treats I was accustomed to back home.
I wandered all over Firenze, in and out of churches, museums, and piazzas. The Cathedrale, “Il Duomo,” is a marvel with its stunning dome of red tiles and Ghiberti’s Gates of Paradise. I climbed Giotto’s Tower muttering to myself, “Never again,” but what a view. I discovered two pieces by the sculptor, Verrocchio, my maternal family name. Verrocchio’s “David” stood triumphantly in the Palazzo Vecchio, installed at the height of the city’s power in 1476. Cast in shiny bronze, the young, small, but mighty David holds the head of the slain Goliath. I came to prefer this David to Michelangelo’s famous monumental piece. Verrocchio’s David is conjectured to be modeled on his young handsome student, Leonardo Da Vinci.
In Renaissance Art class, Paolo compared three renditions of David: Donatello’s and Verrocchio’s David’s are at rest, comfortable, while Michelangelo’s David is tense, an unsure giant trying to rise above human limitations. Paolo extended his arms in a poised way: Only spiritual man can be the measure of all things. Problem is establishing the point between rationality and faith. The solution is perspective.
Perhaps I lived another lifetime in the Medieval era.

My epiphany in Florence occurred at the Museo de San Marco, a Dominican monastery, where each monk’s cell is decorated by the frescos of the Dominican priest Fra Angelico. Climbing the stairs of the monastery, I suddenly came face to face with Fra Angelico’s “Annunciation.” The holiness of Mary’s call transported my soul as the angel Gabriel announced the coming of the Lord. I returned to San Marco as often as I could to enter this realm of holy presence as I realized the miracle had come to me too. I pictured myself copying illustrated manuscripts and sleeping under the image of a Fra Angelico fresco. 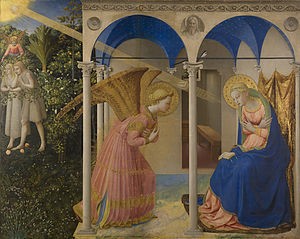 Beauty and generosity were present everywhere, in little places and in monumental ones: the old man in Figline Valdarno on a damp day gesturing at my sandaled feet saying in Italian that cold makes the whole body sick; the lady peeling my pear at the fruit stand; Teresa Gabboto bringing me and my friends in from the rain under her umbrella to her pensione when we arrived in Venice. I found myself living a different rhythm, one of spontaneity. One day our cook, Pietro, recruited a few of us to pick the grapes on his farm which abutted the monastery. I threw aside my fear of bees to pick bunches of grapes for half a day. Picking grapes I discovered is tedious and takes a lot of patience. The cook gestured to me as I was the only one that knew any Italian to invite the studenti to dinner. I replied, Si, con piacere, Signore.

Our group was surprised to see the food prepared in a pot hanging in an ancient open fireplace. We sat down with Pietro’s family to a meal of pasta in meat sauce, sausage and eggs, salami and pears. I noticed my hosts, like my family, drank their wine with water but the wine they offered us studenti was undiluted. I also noticed their beautiful dark-haired daughter Anna; how well her parents protected her from our naïve American males, who I am embarrassed to see, are getting drunk and more foolish by the minute.

Painting in the Monastery 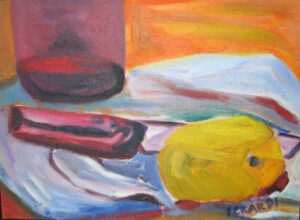 I took a painting course with an Italian artist. I asked permission to paint in a large empty room in the monastery. My works in Italy are all abstract geometric paintings, painting my inner states rather than a realistic view of the landscape… the landscape of my imagination which years later became my artistic signature. I discovered geometric forms as a kind of meditation. Maybe that’s why I was attracted to Moslem architecture in Art Appreciation Class in ninth grade and my still unfulfilled longing to go to Istanbul to enter the Blue Mosque and the Hagia Sophia. I descended up and down a ladder of the monastery, in spite of my fear of falling, to execute a large area on the higher section of the wall. In this way, I left a part of myself in Italy. 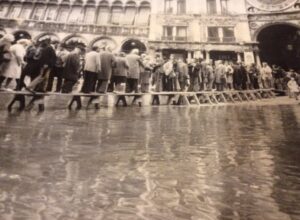 Two black and white photos I took and developed in photography class: one of a huge crowd entering St. Mark’s Basilica on raised boards as the entire piazza is flooded the day we visited; the other photo of a group of Italian teenagers with their arms around me on a small boat to Capri as a musician played his accordion and we sang Neapolitan tunes. 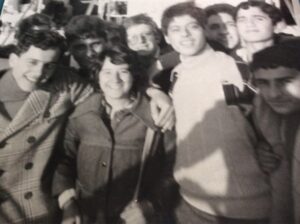 The last day of our formal program I sat on the wall in Fiesole overlooking the city of Firenze. The sun penetrated me. I felt its radiance and clarity. I beheld for the last time the Arno, the Duomo. Two of my friends stayed on in Italy. I was sad to be leaving, envious of their plans.

To my surprise, I uncovered a fuller dimension of myself in this country which my grandparents had chosen to leave for a better life.  I  became the benefactor. I realized my life was  shaped not only by my thoughts but also by the places that connecting me to my heart, that made me come alive. When I entered Italy I was cautious and tentative, but now I had grown relaxed and outgoing, more at home than at home.

Ironically, I lost my desire to paint after I returned from Italy. My senses and eye had so matured with the art and color of the Renaissance that I had no desire or vision of how I might paint again. Yet I couldn’t make the connection between my soul and my paint brush, between my solitary life and the life around me. While my sensibility had matured,  I wasn’t ready to integrate these changes into an art form.

Later I learned that Renoir had had a similar experience after visiting Italy and seeing the masters’ work. He was forty years old and had become famous for his Impressionist works. He was stopped in his tracks, as I had been, after viewing the works of Raphael, Titian, Botticelli, Caravaggio. Renoir, on returning to Paris, said: “I had gone as far as I could with Impressionism. And I realized I could neither paint nor draw.”